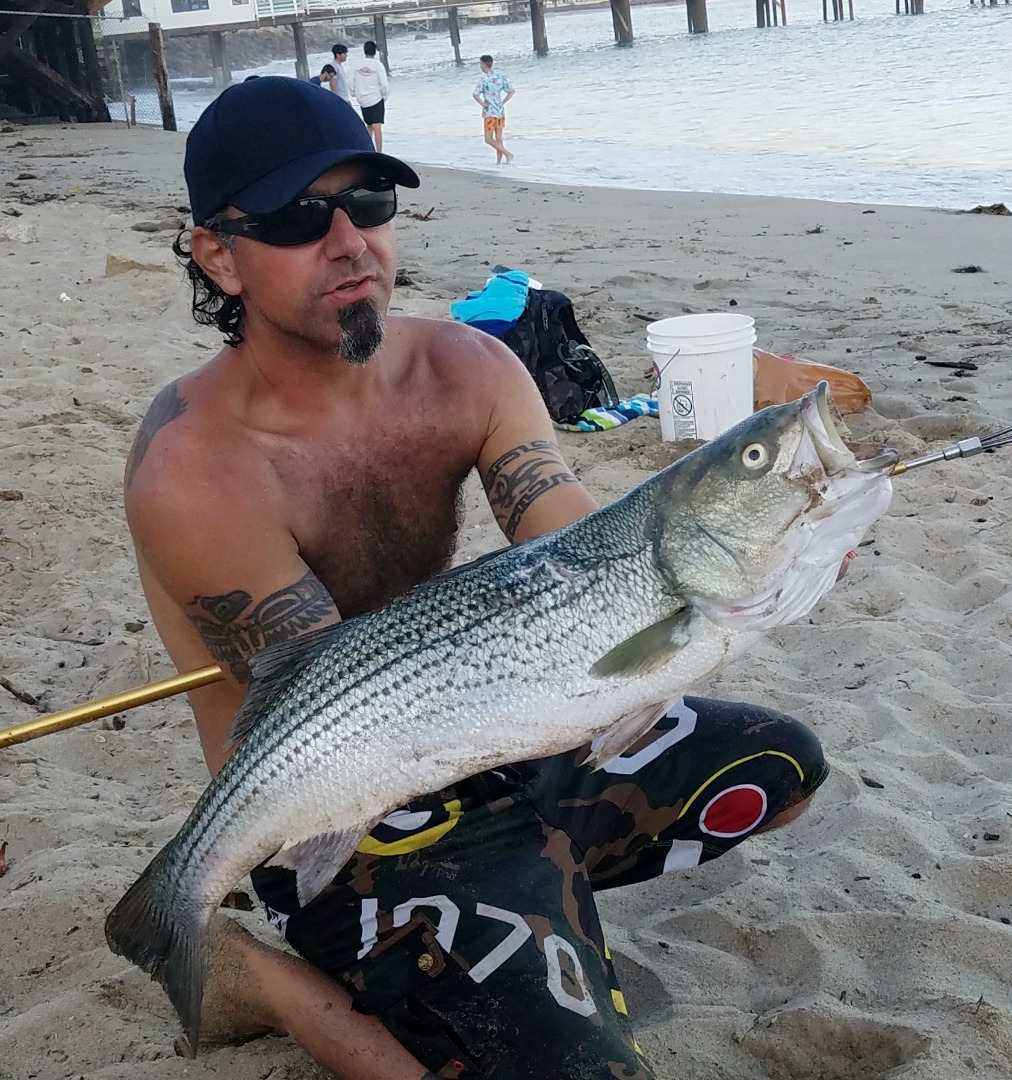 It was about an hour after low tide and I decided to go in and look around, following a Sandbar that went out with rocky areas on both sides and within minutes I spotted what was NOT a Corbina. It was a Striped Bass. I hesitated because it was kind of like "whoa", then let my 6' pole spear go at about a 10 foot distance in waist-chest deep water. When hit, the fish immediately went upwards and started thrashing violently to which I grabbed my pole with two hands and drove the 3-pronged "paralyzer" tip into the ground to pin the fish because I knew that it would manage to come off or bend or break my pole. Ironically, a similar thing happened last August with a 34lb White Sea Bass that strangely, was also in chest deep water just a stones throw from the Malibu Pier!

So, I held the Striper there, looked for any incoming breakers, then finally managed to get my hands into its gills. I was stunned. A White Sea Bass...sure, but Stripers in waist-chest deep water off Malibu? I'd never heard or thought.

The whole thing caused quite a stir with beachgoers, and while I was busy showing people and talking to interested people I was thinking in the back of my mind that stripers are a schooling fish and that there may be more. Also, there were lots of 3-4" baitfish that looked like anchovies, maybe smelt in the water there. So, after about 15 minutes I got back in, and sure enough there were more. In the next half hour, I got to within 10-15 feet of two, and got to a max length spear shot (~12') of another and decided to take a full shot even though I would be letting completely go of the spear and didn't have a tether. I managed to hit the fish dead center, almost identical spot as the first! The Stripers all appeared to be around the same size give or take a few lbs. There were grunion runs the night before and that night from what I read, and it was close to the last Spring Tide of August, which have proven to be the best days all together spearfishing. Since that day, I've seen/noticed people fishing off small-sized (4-person) private boats at low tide in identical conditions, bringing their boats literally up to the low tide breaker zone, so perhaps theres something more to it than a one-off event?

More about the arthor:
I've been fishing every which way all my life, but in the more recent years I have really come to prefer spearfishing over all other methods. One method in particular, I really enjoy spearfishing in the surf zone using a pole spear and more often than not lately, I like to spearfish by sighting and stalking, rather than to be snorkeling or freediving. I find it to be more challenging and difficult (maybe 1 fish for every 6-8 shots) and its a more "primal" feeling!

I first learned how to Spearfish at Malibu Surfrider Beach about 20 years ago, but only really started going all-in in the last few years. This summer I have spent at least one to two days a week spearfishing the surf zone between Malibu Inn, Malibu Pier, and Surfrider Beach from 1st to 3rd Point. I've kept a pretty good tally of every spearfishing day that I've had with what I've hit, missed, and seen. When you spend sunrise to sunset pacing through the surf you sure do see a lot of things not to mention learning how to read the beach, the tides, and the habits of specific fish very well.

I primarily enjoy spearfishing for California Corbina, which ironically is the perhaps only fish I've never managed to catch with a rod and reel. In years past, I have speared some fairly nice sized ones, and only this summer come to find out that the world record for spearfishing is 5.5lbs. (Versus 7.8lbs rod/reel), so I have set my sights on trying to break it, because I'm fairly certain that I have speared corbina larger than that in years past but just didn't know.

In August I've hit two close ones (a 5.2lb and 5.3lb), and I've certainly seen and missed ones that probably were records. The Corbina that I spear are regularly in the 22-26" 3.5-4.5lb range. 95% all females running ripe. I've speared 49 Corbina in my last 12 spearfishing days. However, I have figured out exactly what time/tide (and to a lesser degree by looking for sand crab beds) as far as when and where the fish will be running along the inshore trough. So, often I will get all my Corbina in a 2-3 hour period during the incoming tide between the 1st low and 1st high in the mornings.

Other than that, about the end of August, I had speared during the incoming tide (got 4 Corbina), and as is often the case, the fish retreat at high-to-low tide to deeper water. So, I decided to head over to between second and third point at Malibu, which is pretty much directly in front of Malibu Lagoon as the tide was going out to a low tide. During outgoing/low tide, this area becomes a sort of shelter or Cove, and schools of Yellowfin croaker are always running through. I've also spotted and speared Leopard shark during low tide. This area is kinda unique, as it's mostly rocky with patches (outgoing bars) of sand in-between where I often see Halibut (got one 23" keeper back in July) by 3rd point, I've speared Calicos and Surfperch around the kelp-covered submerged rocks & seen Sheephead (snorkeling in 12' deep water). 9-10-2019
There were 3 big Albacore caught at the Guide a few days ago! The fishing reported remained the same today. There...... Read More 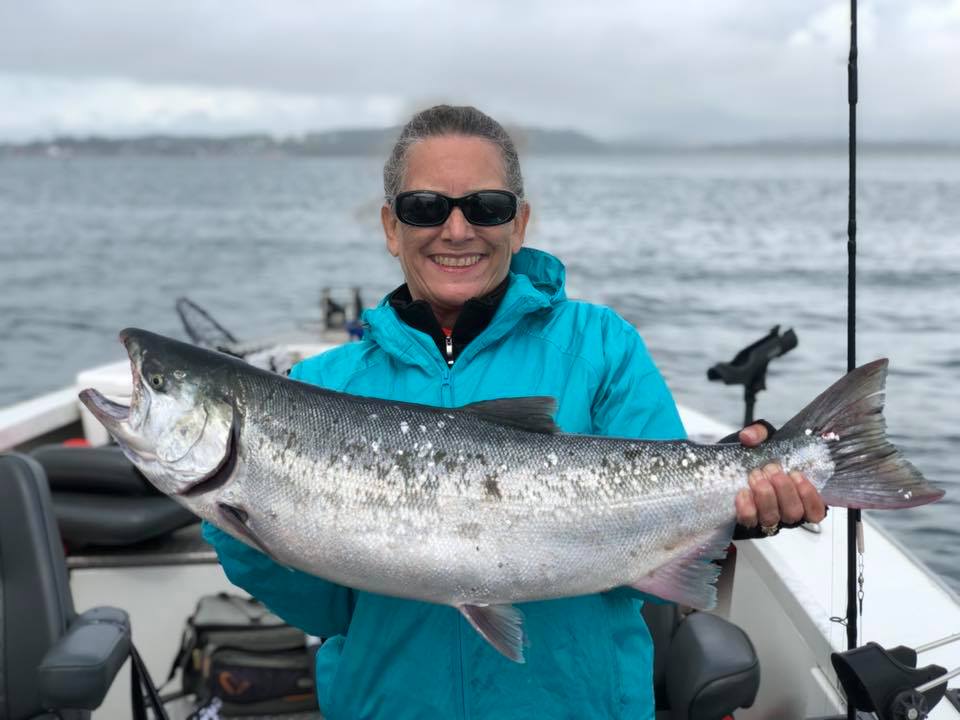