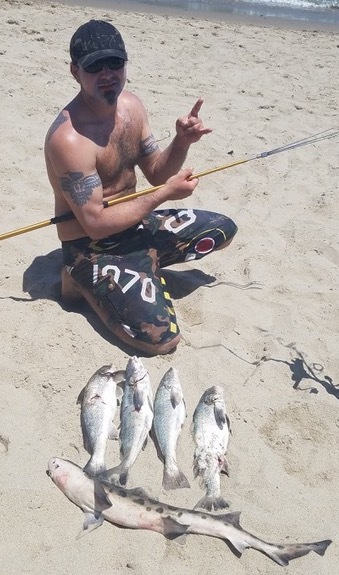 The Malibu pier has had several Thresher sharks a week (upwards of 100lbs) on foam float rigs with mackerel chunks.

Closer to shore, occasional Croakers, Perch, and lots of 10-14" Kelp and Calico Bass around rock shelters and rocky areas on small plastics and lures. Lots of Striped Mullet and Ocean Whitefish schools around Spring Tides.

A few juvenile White Sea Bass have been caught in the shallows (I lost one). Corbina action picked up especially when the Sand Crabs molted shells, and Halibut have been pretty on, with almost a few 16-25" fish a day on plastics and live bait. Stripers have started to show up, but are tending to stay a bit further out beyond the surf breaks with an occasional fish straying from the schools into the shallows.

Through the month of June, conditions all around were on a constant improvement, resulting in better fishing with every week. Then, the full and new moon tides of July have eroded several feet of sand off the beaches. Following this, the conditions (from the weather to water temperatures) have taken a downward turn with each week of July and in-turn, the fishing has slowed down and the variety of species is way down.